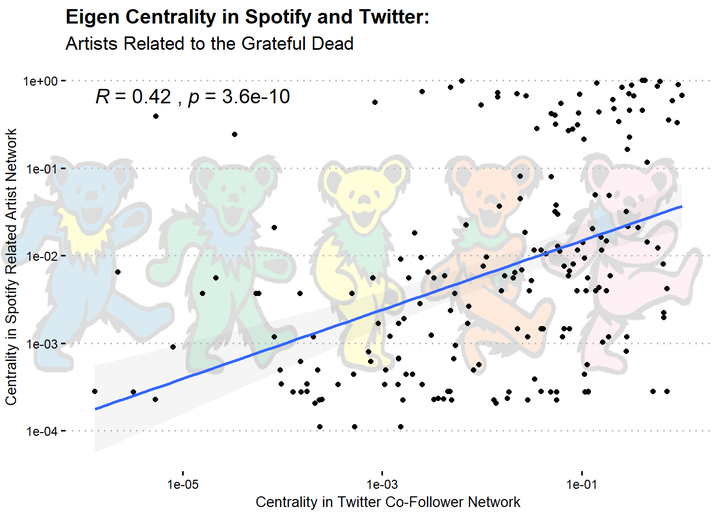 I’ll be looking at The Grateful Dead’s Recommendation Network and the extent to which the artists artists in that network have followers in common on Twitter. I decided to focus on The Grateful Dead for two reasons. First, I’m a longtime fan. Second, they’re a sort of interesting case because they overlap with a lot of different genres, from Outlaw Country to Electronica, which should hopefully result in a pretty interesting network of artists.

According to Spotify, their recommendation algorithm is based on:

So, we can think of it as mostly a co-listener network, or a network describing the extent of artists’ shared listeners.

One quick note: I don’t show any of the code below, but a knitted, documented html of the code used in this blog is available here.

My first step was to download the data through Spotify’s API, which I did using the wonderful spotipy package for python. I used the tools in that package to search the Grateful Dead’s Recommendation Network. My basic idea was to:

The main decision I had to make was how high to set the maximum depth, which I ended up setting to 10. This means that the network was limited to artists that are at most 10 steps from the Grateful Dead (1 step = the Dead’s 20 recommended artists; 2 steps = the 400 or fewer unique artists in those 20 artists recommendation lists; etc.)

As a first step, I wanted to visualize the network, highlighting artists distance from the Grateful Dead.

Distance from the Dead

I wanted to examine artists’ distance from the dead (the ego of this network) for two reasons:

A couple of things immediately jumped out to me when I saw this graph:

In all, this network made a fair amount of sense, so I decided to move on to the next step.

Next, I took all of the artists in the network above, searched for that artists’ name on Twitter, did some screening to make sure the Twitter accounts I searched were indeed the artists I was looking for, and then retrieved full follower lists for all of these artists. Although these were pretty messy search results, I was able to use the Levenshtein distance metric to filter and check potential mismatches. The process worked well and was relatively painless, so I’d recommend checking out the RecordLinkage package and the levenshteinSim() function if you ever deal with messy search results. Even with these packages, this step was the most difficult and seems like a barrier to scaling up to running these analysis on a set of artists’ networks.

Before we get any further, we need to take a brief detour into the technical weeds of social network analysis. The full, combined Artist-Follower network can be thought of as a bipartite network, which basically means a network with two sets of nodes. In this case, that is artists and followers.

Brieger (1974), demonstrated bipartite networks can be projected to get associations between one of the node types based on the extent of co-occurence of the other node type. In other words, we can get how closely associated artists are based on how many followers they share, which we can call the artists’ co-follower network.

First, we might want to visualize the network, which I’ve done below as a circle. This is the only layout that allows you to easily see just how interconnected the nodes are. Note that you can select nodes by artist name using the dropdown menu or interact with the graph by hovering over or clicking on nodes.

The big take-away from this particular graph is that artists related to each other through Spotify’s recommendation network are related through Twitter’s co-follower network.

So what does this mean?

This isn’t too surprising, but it does suggest that musical preferences are expressed similarly in these two very different platforms.

Lastly (for now), I wanted to follow up on this result. The above graph is a pretty coarse comparison, showing that members of the dead’s recommendation network on Spotify tend to also be connected via Twitter followers. Next, I wanted to see if these networks were structured similarly, focusing on node centrality. I did this by correlating artists’ Eigen Centrality the two networks.

First, I checked how each were distributed: 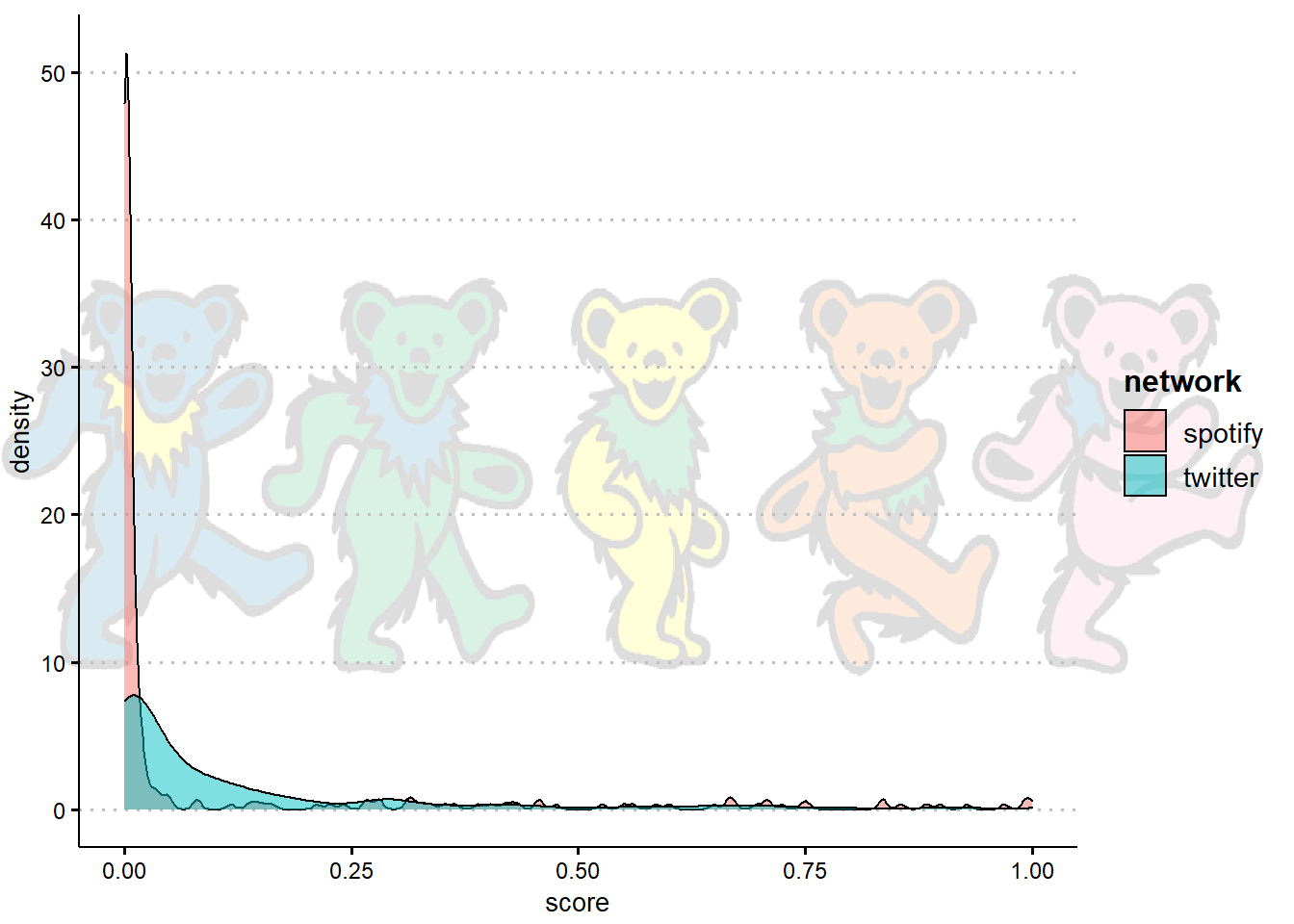 Noting the positive skew, I applied a log (base 10) transformation to each. 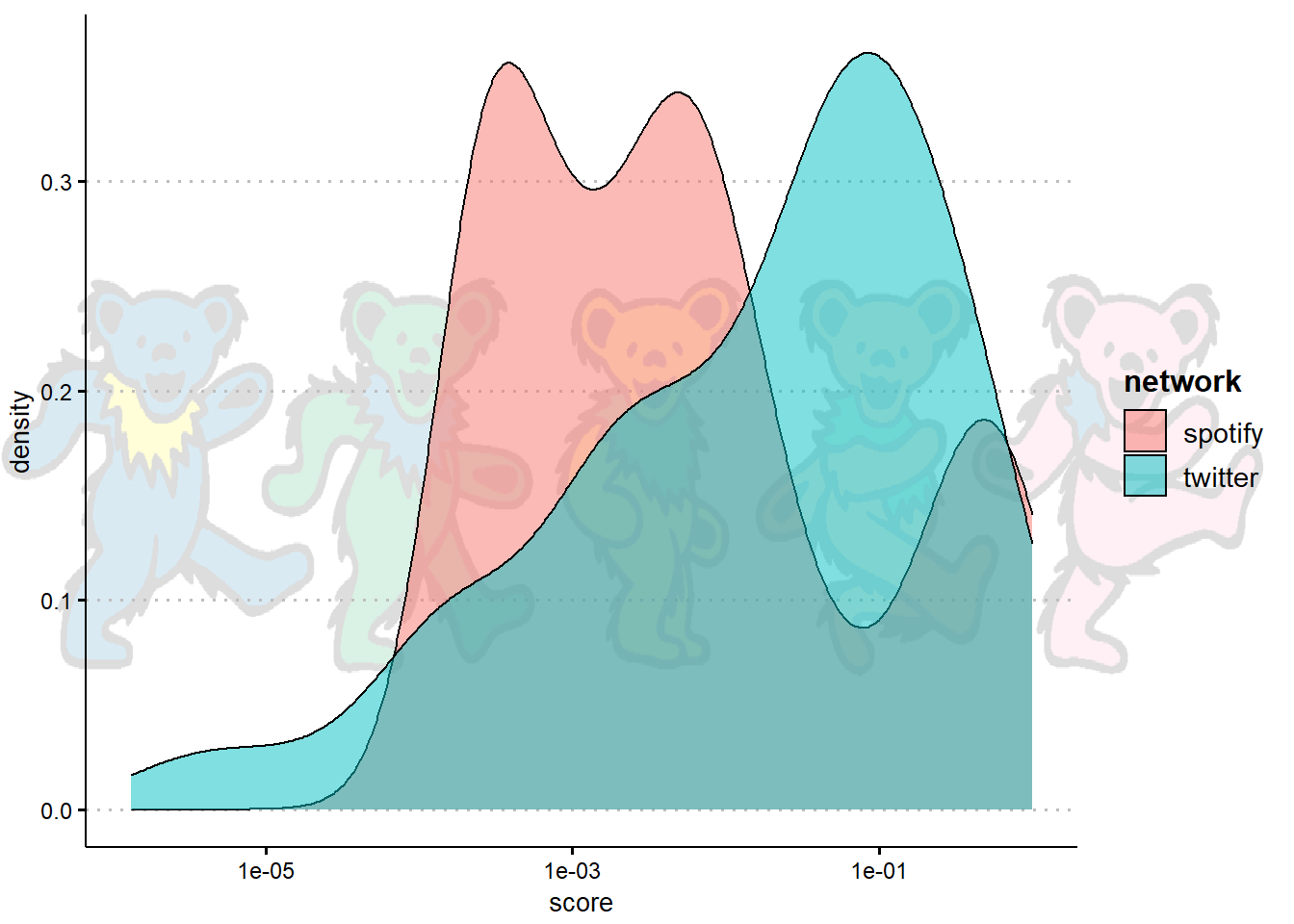 As you can see, the distributions aren’t perfectly normal but look much better.

Finally, let’s take a look at their correlation by getting a scatter plot and a smoothed linear regression line. 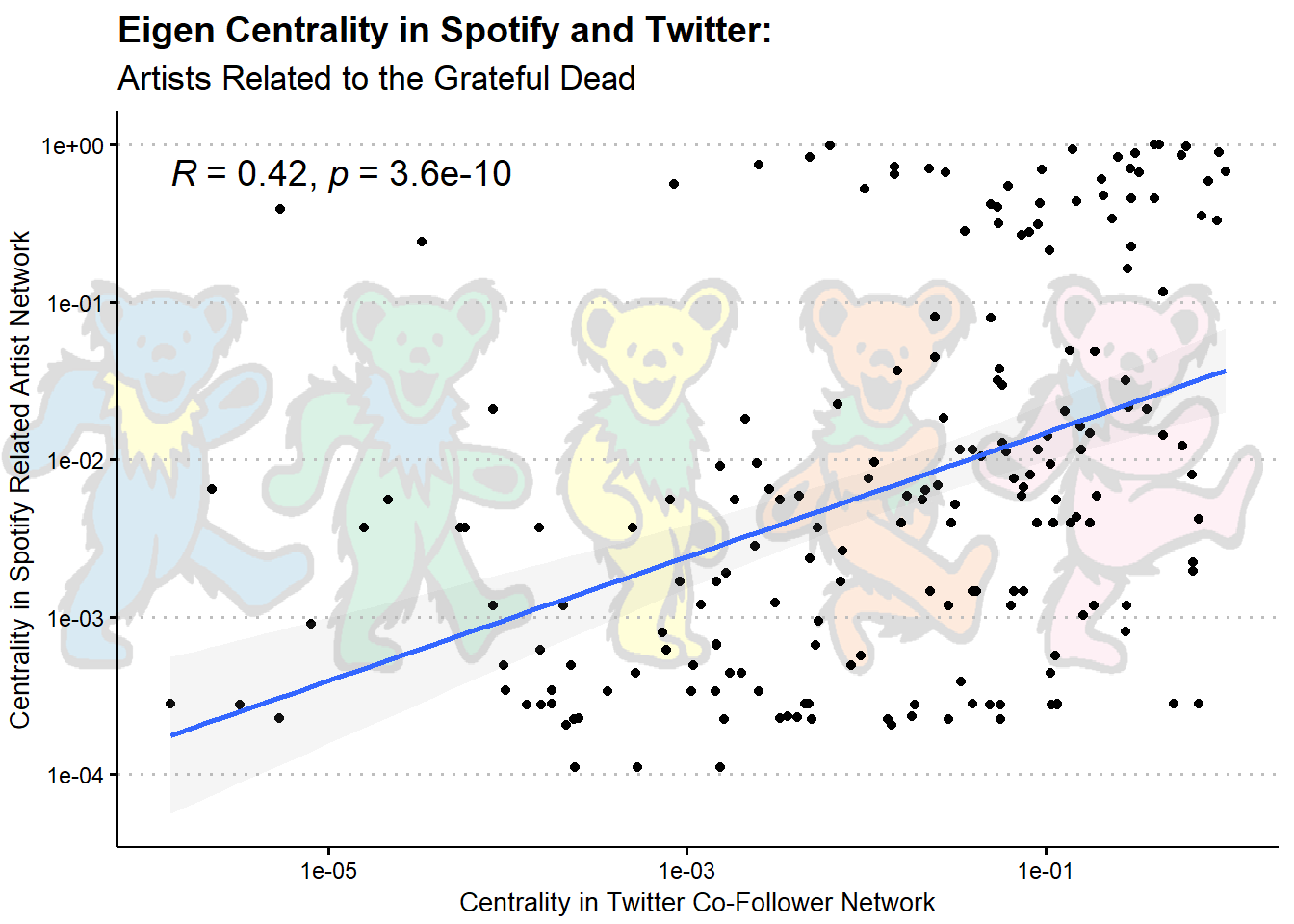 The above graph shows that an artists’ centrality in the Grateful Dead’s Spotify recommendation network is moderately correlated with their centrality in their Twitter co-follower network (r = .42), demonstrating further that music preferences are expressed similarly in Twitter and Spotify. 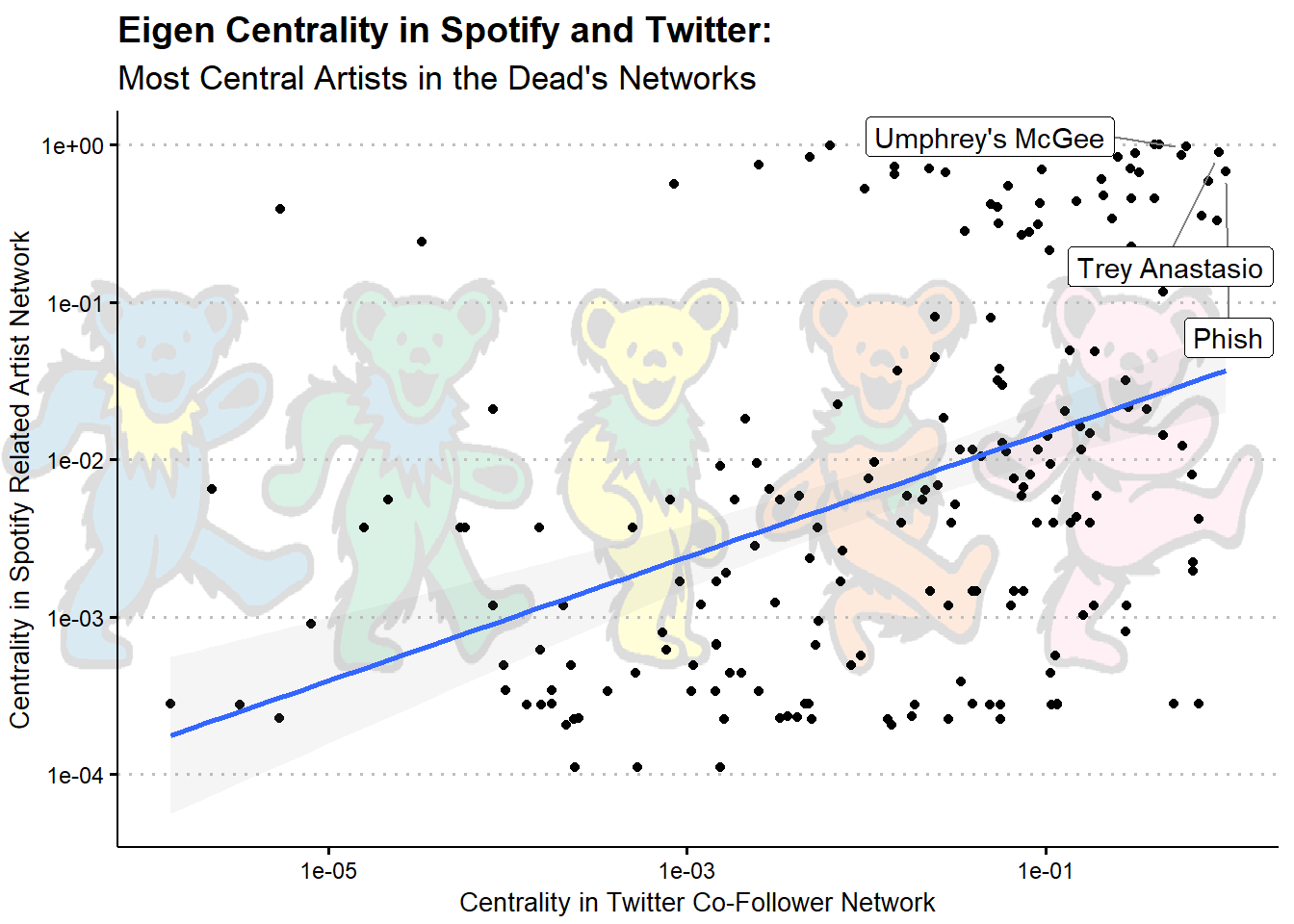 It looks like the most central nodes in both networks are Phish, Trey Anastasio (Phish’s guitarist & lead singer), & Umphrey’s McGee (another modern jam band). This makes a fair amount of sense - these popular newer jam bands probably have fans in common with both classic jam bands (e.g., the Dead) and more modern festival acts (e.g., EDM).

We can also take a look at the least central nodes, which are shown below 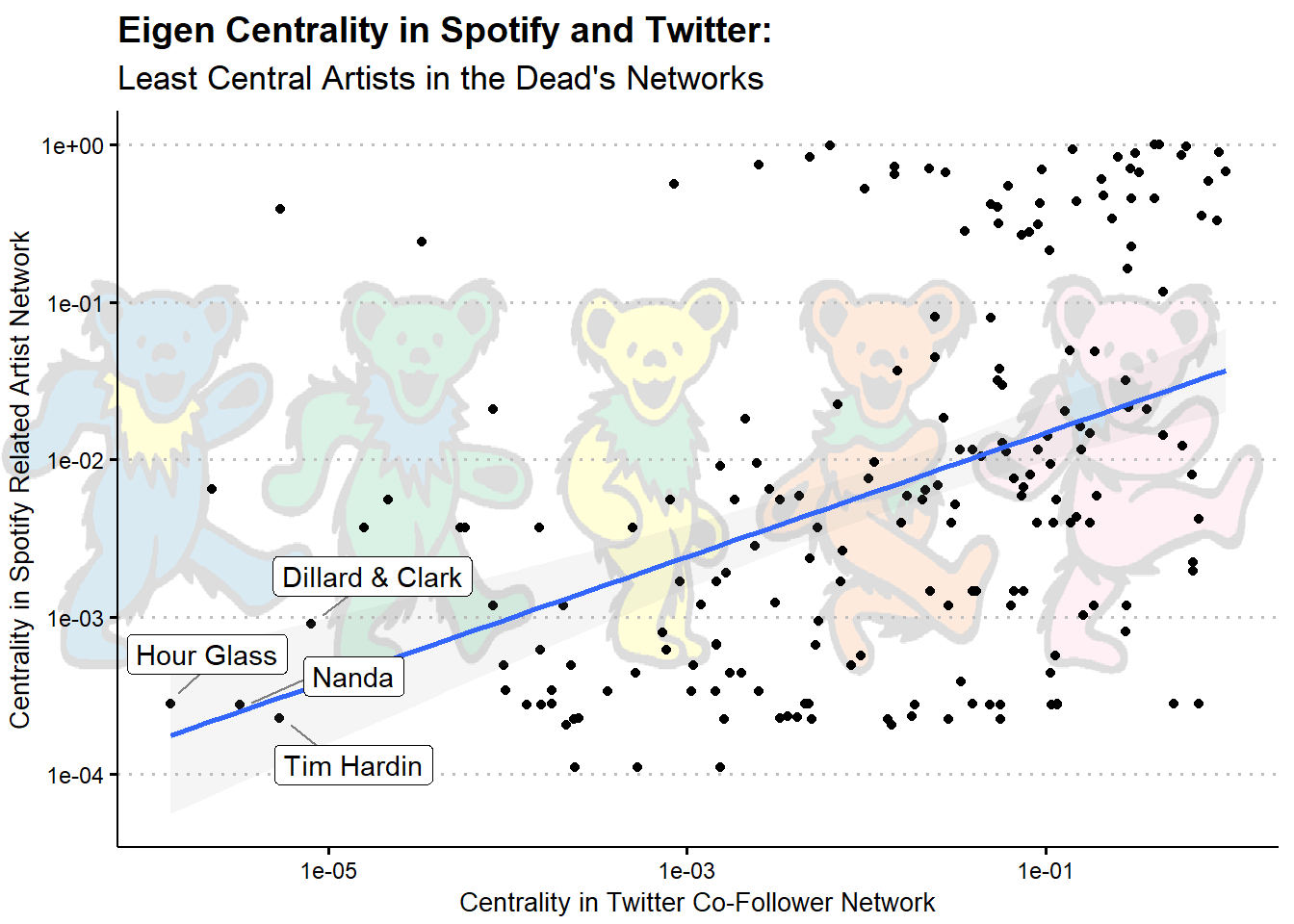 These are four artists that were new to me when I saw this data. Given that these were among a handful of artists in this data I’d never heard of, their low centrality seems to make intuitive sense as well.

The last thing we might want to look at are the points of divergence; which artists are more central in one network or the other? 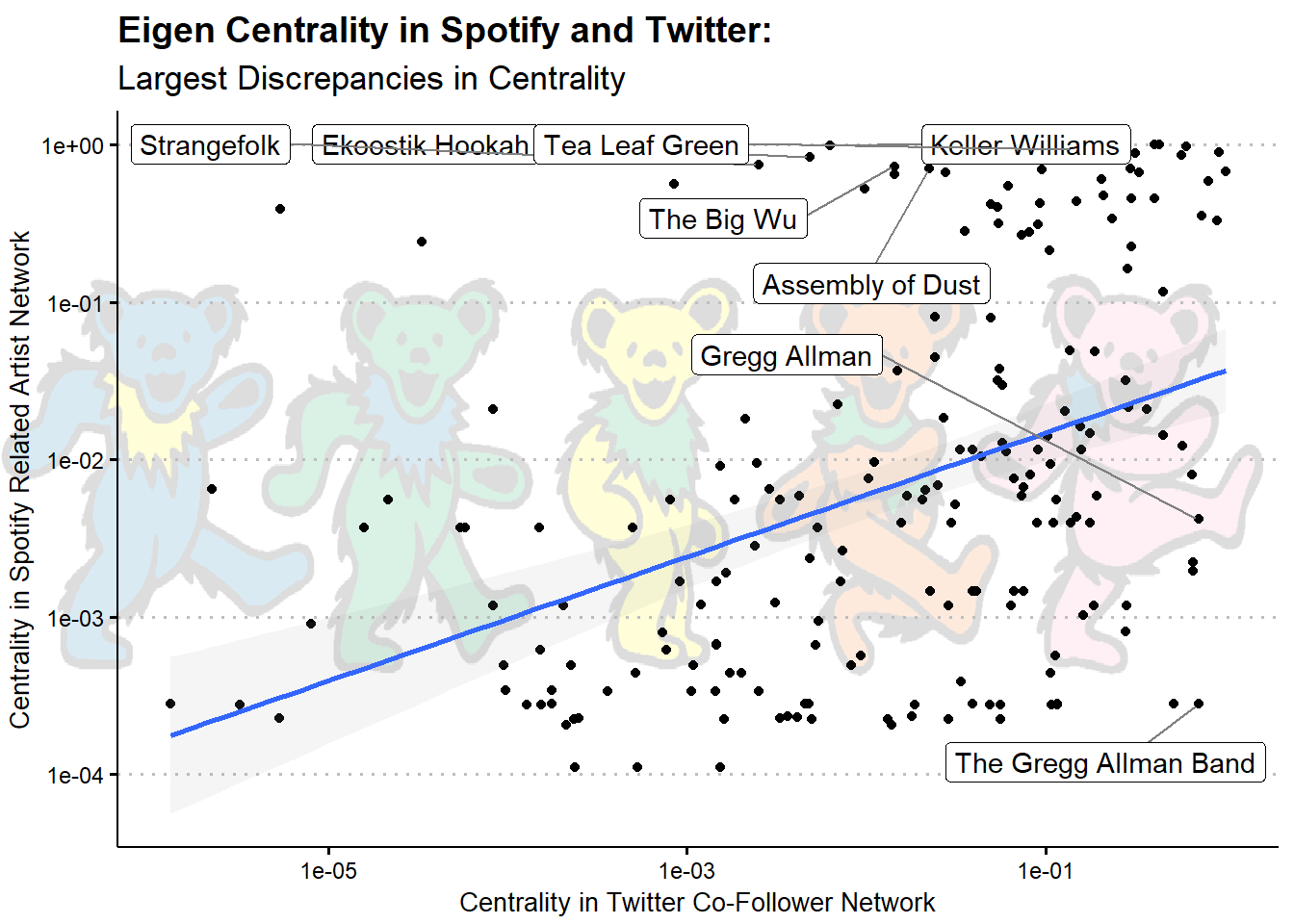 The labels at the top like Keller Williams are artists that are more central in the Dead’s Spotify Recommendation Network than their Twitter Co-Follower Network, and the one’s on the bottom (basically just Greg Allman) are artists more central in Twitter than Spotify. Perhaps this reflects the fact that spotify users tend to be younger than Twitter users, so the former are more interested in modern (related) acts while the latter are more interested in the Dead’s contemporaries.

Before I conclude, I wanted to point out a couple of caveats and limitations in the above analyses.

Second, I don’t know the full details of Spotify’s or Twitter’s recommendation systems. It is a distinct possibility that these companies base their recommendations on each others’ data. If that were the case, then we have something akin to methods variance artificially inflating the correlation between artists’ centrality. Spotify does not mention Twitter co-followers in their description of their algorithm, but that doesn’t necessarily rule it out.

Third, this is a single network and we might expect things to look different in other networks. Ideally, one would sample networks and examine the extent to which the pattern varies across networks (e.g., in a HLM/MLM framework). If I find a little more time, I may do this myself and post the results here at some point.

Even with those limitations in mind, I think there is something interesting here. In some ways it is unsurprising that artists with more listeners in common on spotify have more followers in common on Twitter - we might expect fandom to be expressed similarly across many different networks. At the same time, it is a little surprising given the differences in what each platform affords users (music listening & discovery vs. microblogging).

That’s all for now! Tune in for Vol. 2 of Spotify API Fun, where I’ll take a look at community detection algorithms, and the extent to which they find similar communities in the two networks I introduced today.